For me, being and eldest daughter among four children, is a blessing. Difficult, but bearable. For years, I never thought about having a big brother, until I met this one guy when I was in Junior High, 1983.

I can’t remember when or how it started. I didn’t remember how we could get closer to each other. Totally not remember 🙂 All that freshly remembered till now is the feeling. The comfort feeling when he was near and happy to see him around. I guess it was years of close brother and sister relationship. We parted after the graduation in 1986.

My family moved to Jakarta. Though it was blurry, but I could recall that he moved to Jakarta too. We have a short contact for one or two years, before we completely lost each other.

Time flew. I never understand the reason. But as far as I can remember, while friends come and go, he, whom I called Kangmas, always has a special space in my head and in my heart. Seems like I carried him everywhere for years. I mentioned his name once in a while when I chat with my friends. I told story about a brother I had in Junior High. How I wish to see him again. I remember, I did that for many years.

Was he my first love? Probably. But I know for years that, though he was special, he’s not the love of my life. How do I know that? Because though my feeling grew stronger for years and I never forget him even a bit, it never changed to one romantic feeling.

Early this March, out of the blue, my day was colored by a shocking greet on Facebook, from someone I have been carried for years. I couldn’t describe my feeling that moment. I felt like shaking? Walked on the cloud? Jumped around? Grinned cheek to cheek? Any kind of expressions I ever known, they were all there. I was tremendously happy. A blast from the past. My dearest Kangmas is back.

That finally, after a month of many chats, I could meet him again, able to see his features after so many years, was one wonderful moment. Physically, he has changed. He gained more weight, darker skin and a head fully covered with silver hair. On that, I am thanking him for not dyed it black. I love seeing silver hairs on matured people. Because I believe that “Gray hair is a crown of splendor, it is attained in the way of righteousness.” (Proverbs 16:31)

But his face still the same. The face I carried everywhere in almost of my days. He’s matured, but he still the soft spoken and caring brother I remembered for many years.

How I feel about him? Surprisingly, it remains the same. Still feel comfortable and happy to see him near and around. I still the same young girl, who love her brother because he was nice and caring.

These past days, I still feeling grateful. The more I chat with him, the happier I am, having my long-lost brother back. His understanding and concern about my husband, made me relieved and easy.

This is one of the amazing blessing that GOD gave me.

“A friend loves at all times, and a brother is born for a time of adversity” (Proverbs 17:17) 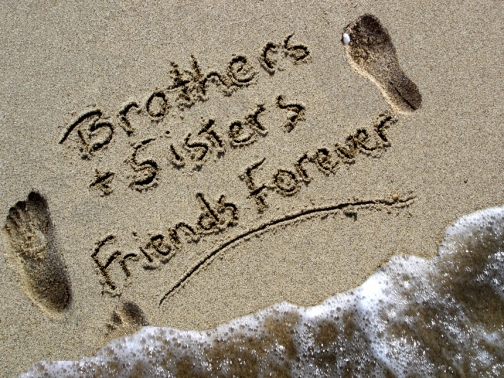